Your CWU Executive recommends that you vote ‘YES’ to ’ACCEPT’ BT’s final offer which is fully outlined below.

Following protracted negotiations the CWU has secured a final pay offer from BT for all Team Members who are NewGRID grades as follows:

* An additional £120 consolidated increase to pay from 1st January 2017 for NewGRID grades who are employed on Workforce 2020 terms, conditions and salary rates (pro rata for part time workers);

* Allowances that automatically increase with pay will increase by 2.6% as well as the Scottish Distant Islands allowance;

* For Team Members that are NewGRID grades and members of the BTPS (defined benefit pension) 0.7% of the pay increase will be categorised as pensionable;

* For Team Members that are NewGRID grades and members of any other pension scheme (such as the BT Retirement Savings Scheme ) the full pay increase will be categorised as pensionable in accordance with the rules of that scheme;

* To clarify future annual pay reviews will be guided by the February inflation rate published in March.

The CWU’s negotiating team has explored every possible avenue open to them and are satisfied that this is BT’s final offer and no further movement is possible. The CWU’s negotiating team is convinced that this offer is the best that can be achieved and this view has been endorsed by the CWU Executive. The CWU is therefore in no doubt that this is the best that can be achieved through negotiation. Against this backdrop, the CWU Executive is convinced that this pay deal must be recommended to members for acceptance.

The consultative ballot will run until noon Tuesday 11th April if accepted by members, the pay award will be implemented in the April salaries and backdated to 1st January 2017.

Your CWU Executive urges you to use your vote and strongly recommends that you vote YES to ‘ACCEPT’! 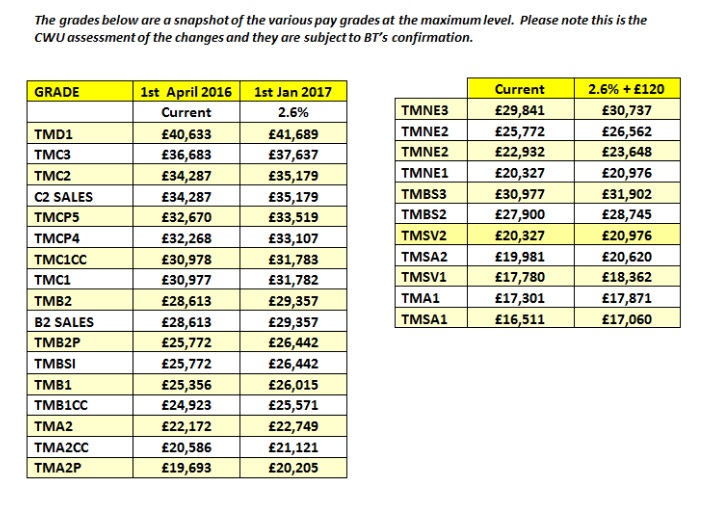